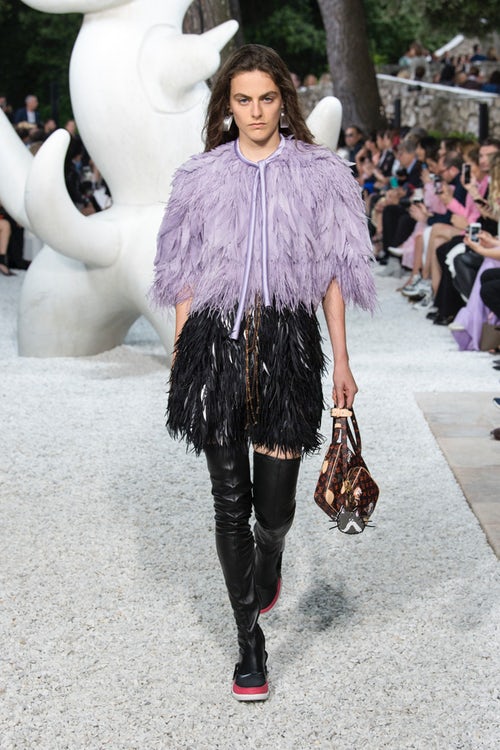 Nicolas Ghesquière’s momentum has slowed over the last five years, but he initiated a new stage of his recently renewed relationship with Louis Vuitton through a spectacular, magpie grab-bag cruise collection

It might be fashion’s most interesting quid pro quo in 2018: Grace Coddington collaborates with Nicolas Ghesquière on the cruise collection he showed for Louis Vuitton at the Fondation Maeght in the South of France on Monday night, and he in turn guests on her upcoming talk show “Face to Grace.”

Though that wasn’t quite the case. After the show, Ghesquière said that working with Grace was actually something he’d been looking forward to for a long time, even if he’s a dog person and she is famously in the feline camp. Given Coddington’s flame-haired presence, it seemed fitting that the Fondation Maeght, one of France’s contemporary art meccas, has been ruled for the past 15 years by a ginger cat called Junior. She took massive offence at the influx of strangers on Monday and was therefore safely caged for the evening.

Ghesquière’s own relationship with the foundation dates back to his first visit 25 years ago. In his ongoing quest for venues which make architectural statements that complement his own aesthetic (which so far include Kyoto’s Miho Museum and Rio’s Niteròi Contemporary Art Museum), he settled on the building Catalan architect Josep Lluis Sert designed for the Maeght family’s collection.

“A love story between family and art and architecture,” Ghesquière called it. “What kind of woman can evolve in that environment?” he wondered. Turned out she was someone who was open to all sorts of cross-pollination, times and places and ideas.

It made for a spectacular, eccentric showing that felt more like a natural extension of the spring season that’s in shops now than a follow-up to the stolidly haute bourgeois autumn/winter collection. And what a relief that was. One of Ghesquière’s calling cards, from his earliest days at Balenciaga onwards, was his ability to blend high culture and its bastard pop offspring. (Who can forget his exaltation of the original “Suspiria,” almost two decades before Luca Guadagnino launches his remake on an unsuspecting world?)

Ghesquière rode a nothing-to-lose momentum that produced some of the most thrilling fashion of its time. In the five years since he came to Vuitton, that momentum has slowed. Given how much higher the stakes are, a certain aversion to risk seems logical enough. But then Ghesquière went and pulled a collection like this cruise number out of the bag, and heavenly choirs sang.

Actually, it was the Nagoya Children’s Choir on soundtrackist Woodkid’s accompaniment. He also mixed in longtime Ghesquière muse Jennifer Connolly intoning lines, mantra-like, from Grace Coddington’s autobiography. And there were solid, pulsing rhythms, like the backing track to a deep, dark ritual. Woodkid said it was, in fact, something spiritual he was after.

That cast a curious light on Ghesquiere’s magpie grab-bag: leather thigh-high/sneaker hybrids, futuro-medieval sleeves, 80s batwings, cowboy hats, LV Damier checks, hand-painted acid wash denim, a splash of Rorschach test, a Kilim jacket, a peignoir as delicate as a fairy godmother’s, a cape of glittering acrylic feathers. And welder’s glasses. And the Order of the Phoenix painted on a few foreheads. And Grace’s cat bags.

These were all just the fine print in Ghesquière’s central concern: duality.

Surrounded by the aerodynamics-made-marble of the Maeght’s twisting, soaring sculptures, he talked about a designer’s fight with gravity, how you want clothes to be all about lightness and suspension but at the same time you must acknowledge the solidity of flesh. Then there’s the duality of fashion for designers who crave timelessness but have to acknowledge that they also need to live in the moment.

Ghesquière’s response with this collection was to anchor looks with strong, broad-shouldered silhouettes (echoing the 80s, the decade he’s mined to such effect for so long), and then take fantastic flight with everything else. Start at the street, then look up — what better way to initiate the next stage of his recently renewed relationship with Louis Vuitton?

Follow US to be updated on the last FASHION NEWS! 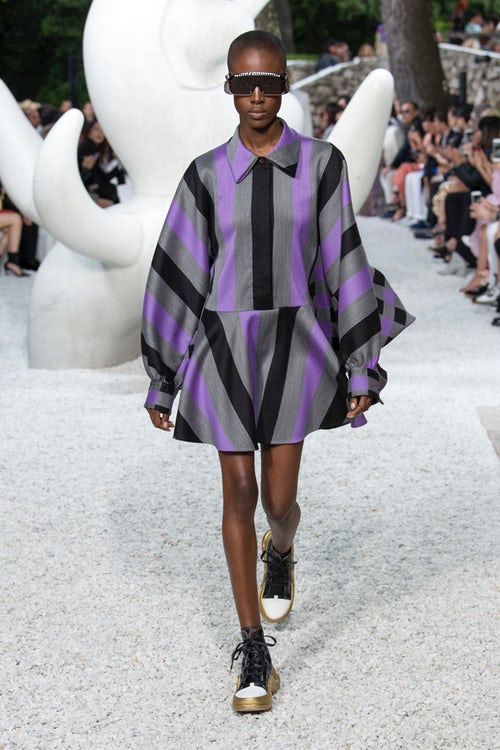 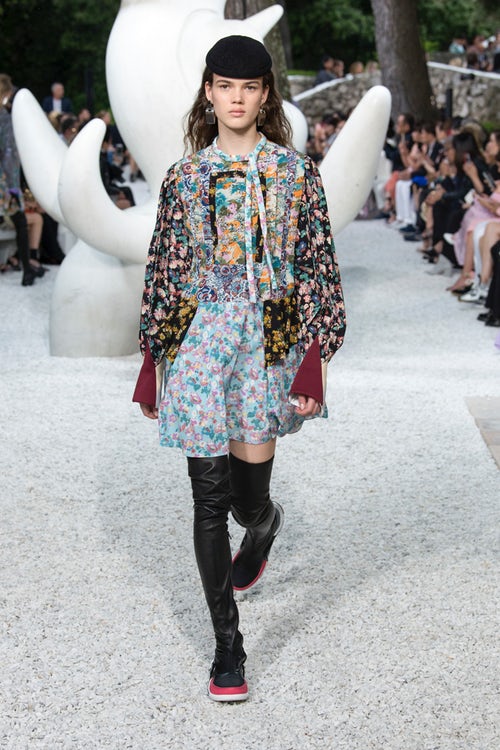 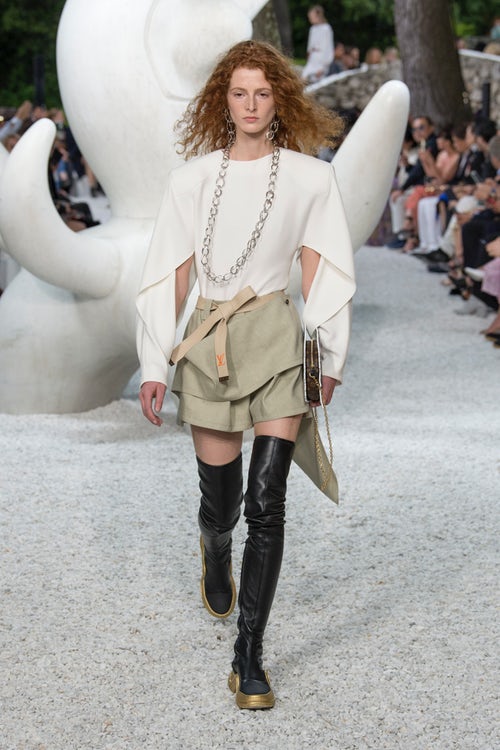 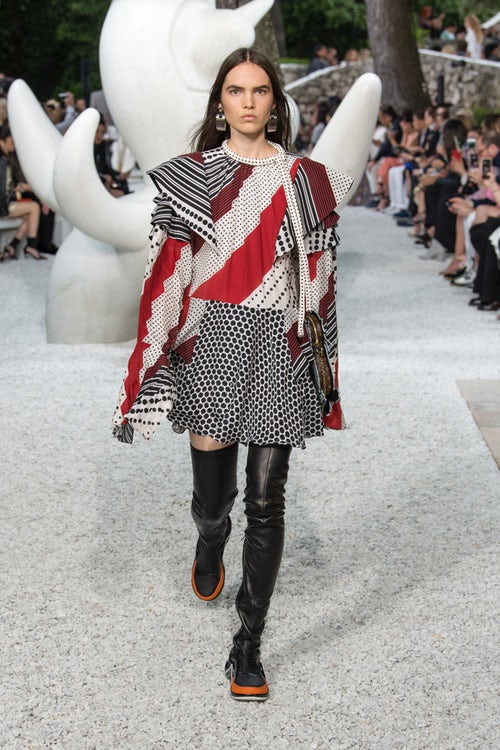 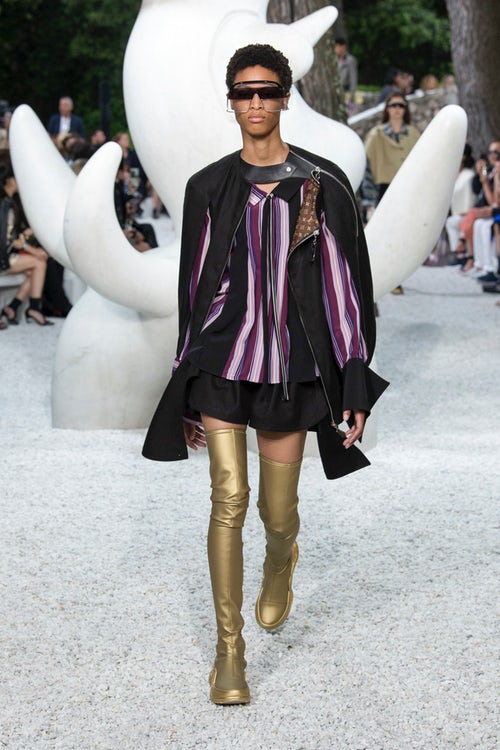 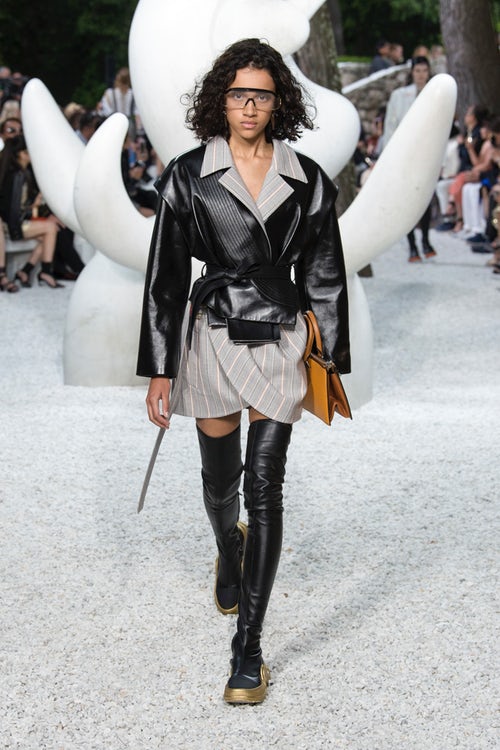 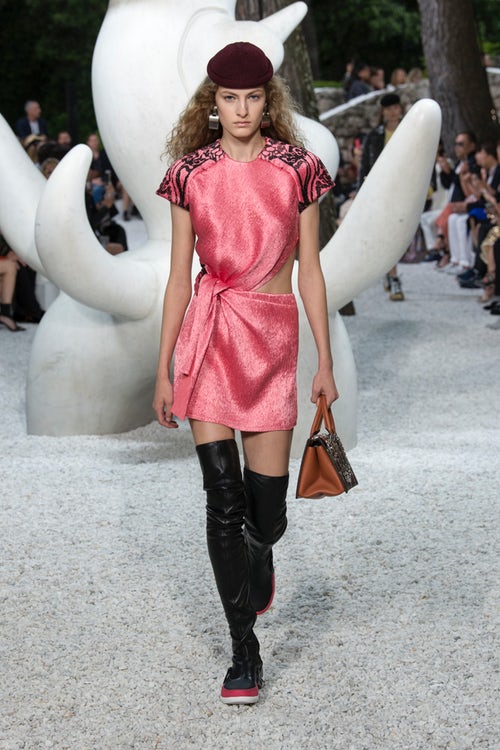 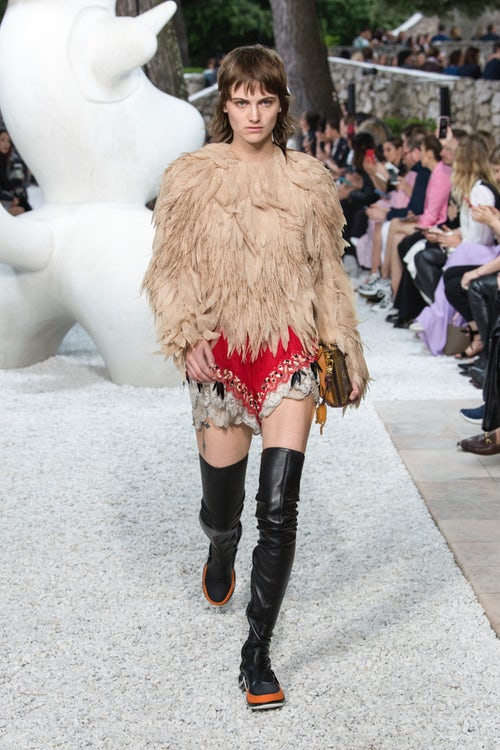 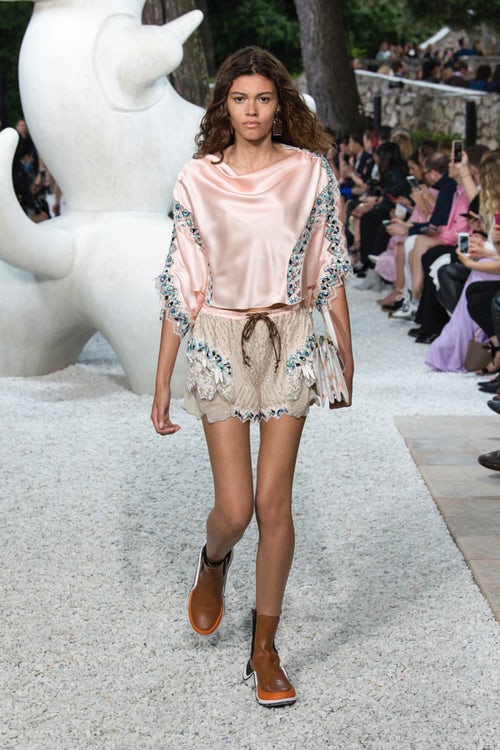 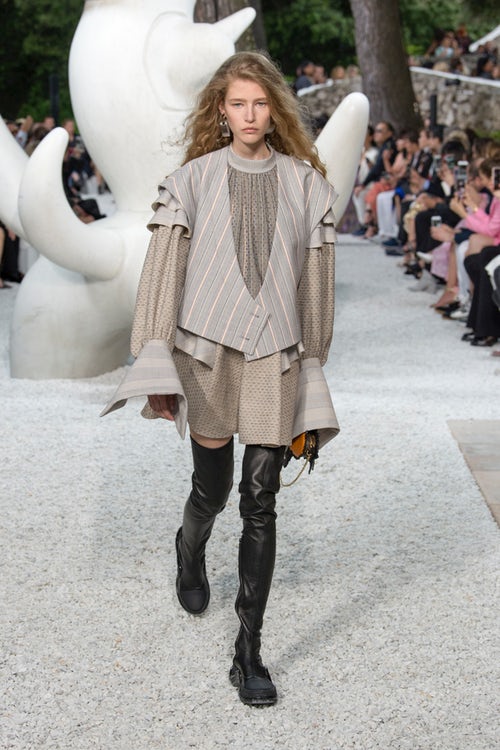 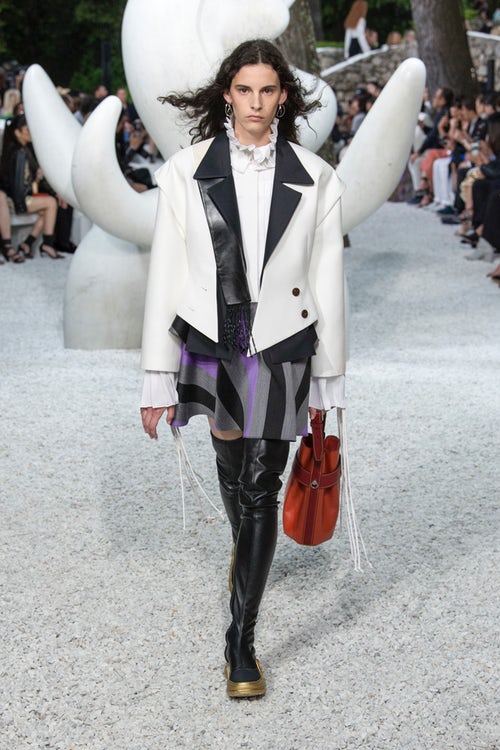 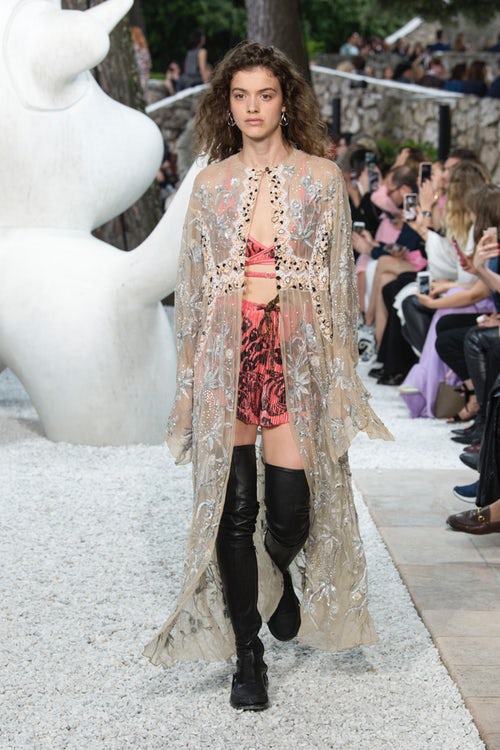 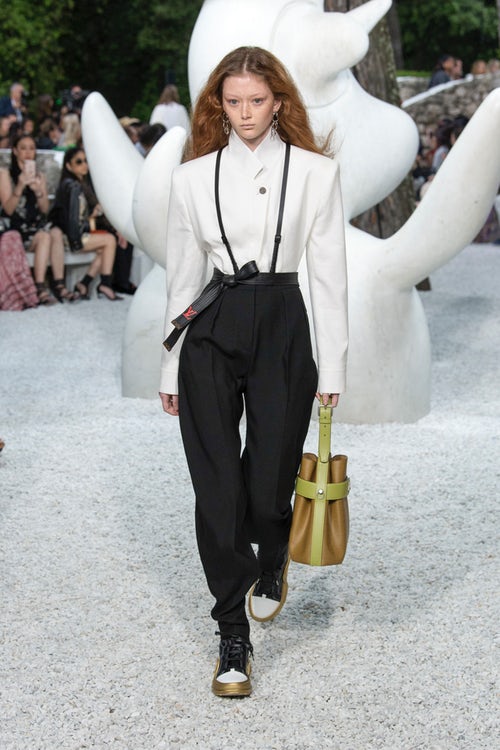 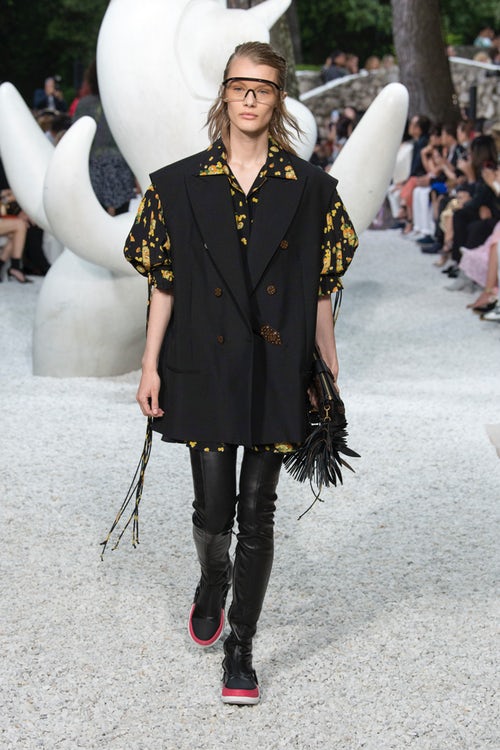 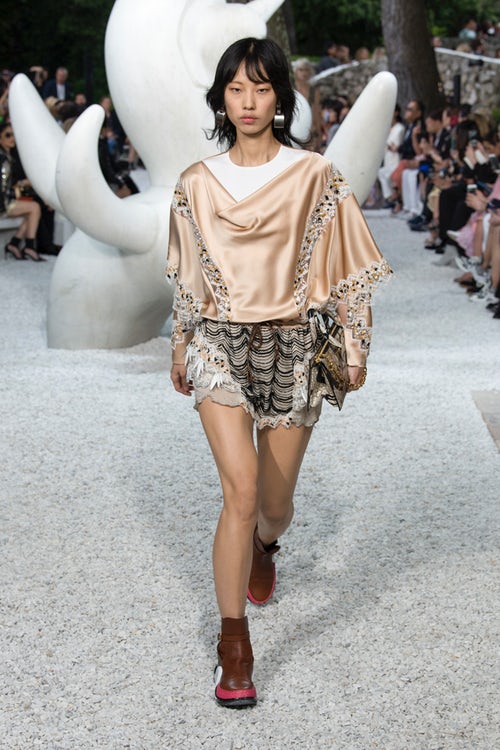 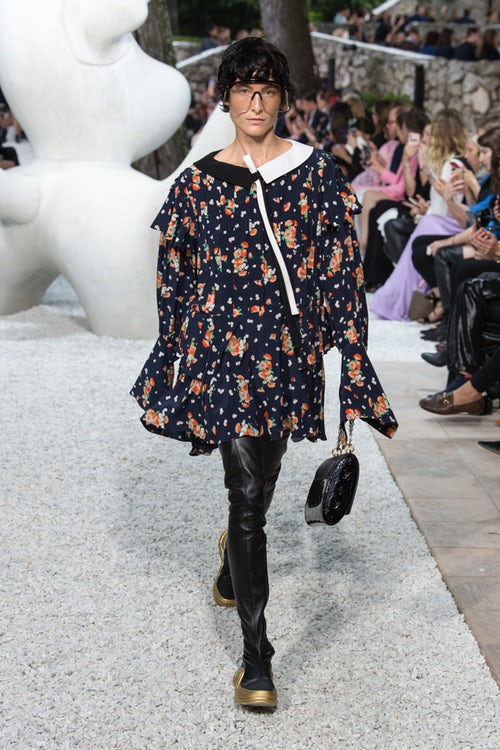 Serena Williams signs a collection of fashion wear for summer 2018

The Lure of Melancholy at Chanel for Paris Fashion Week