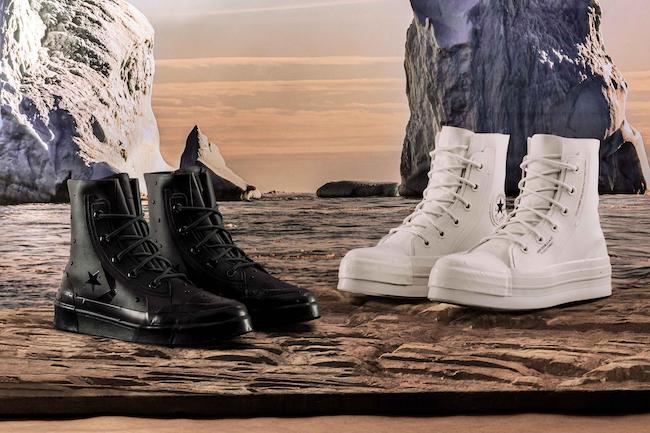 The founder of the brand Ambush, Yoon Ahn, focused on the Converse archive, being a fan of the brand’s heritage and its adoption in society.

During the journey in the Converse archive in Charlestown, a silhouette particularly captured Yoon’s demanding eye: the Extreme Cold Weather Boot.

Ironically known as the “bunny boot” (recently inspired by the Converse Chuck Taylor MC18), the Extreme Cold Weather Boot is a military rubber boot, first developed in the 1950s and produced by Converse.

It is with that eye that Ambush and Converse begin to reconstruct a legacy of analog functions for the modern street style consumer, playing on two classic sports styles: the Chuck 70 and the Pro Leather.

Infusing Ambush’s idiosyncratic and often utility style with both sneakers, the traditional canvas and leather silhouettes are reworked with exaggerated proportions that seem to catapult them into space, while the protective elements ensure functionality on city streets.

The Converse x Ambush Pro Leather and Chuck 70 will be available for € 160 and € 180 respectively, starting October 19, 2019 at selected retailers.