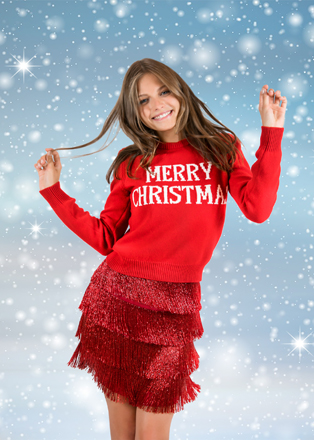 New launch for Alberta Ferretti, which dedicates a special edition of the capsules Rainbow week to Christmas 2018

After the days of the week, the weather version of the sweaters and a spring-summer log in Alitalia, Alberta Ferretti proposes a new special edition project for the holidays, presenting it in two models, in unisex fit and over versions.

On the total red sweaters, entirely made of cashmere and wool, we can read the maxi-written frontal “Merry Christmas”, in a contrasting white snow.

This is still a claim and full colors that are the basis for the sales strategies of the capsules of the brand managed by Aeffe, which has just finished nine months up.

The Italian group that, in addition to Alberta Ferretti, holds the control of Philosophy by Lorenzo Serafini, Moschino, Pollini, Jeremy Scott and Cédric Charlier, has archived the period with an increase in turnover of 12.6% to 264.6 million euros , against the 235 million registered in the corresponding period of 2017.

A year-end that gives hope to the Alberta Ferretti fans, who were already passionate about the lucky capsule with the days of the week, but must have been from last winter.