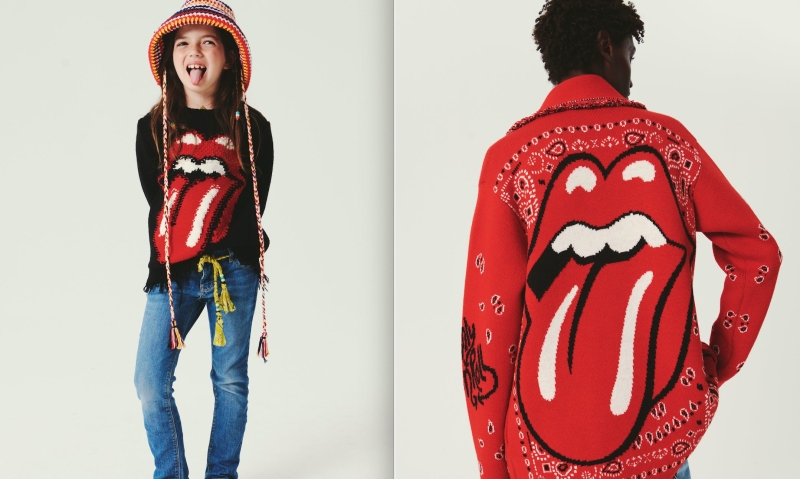 Alanui and Bravado, Universal Music Group‘s merchandise and brand management company, jointly launch a collection of knitwear dedicated to the Rolling stones to celebrate the 60th anniversary of the most famous rock band of all times.

The style and character of the band’s members have inspired the capsule. The collection features bandana motifs and psychedelic patterns express the energy and adrenaline typical of the band and its founders. The typical logo that has always symbolized the band, the unmistakable lips and tongue of Mick Jagger recurs throughout the collection, which includes garments for women, men and children, and appear on both the front and the back of the garments. 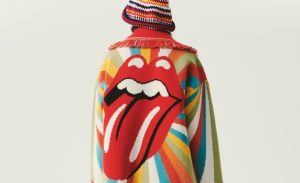 The two souls of the capsule created by Alanui for the Rolling Stones recall the titles of two of the greatest hits of the band led by Mick Jagger, ‘It’s only rock and roll’ (which includes the Icon cardigans in virgin wool, with the recognizable motif bandana) and ‘Start me up’, the words of which are embroidered on the front of a classic black Alanui cardigan featuring the inlay of the Licks logo made with different yarns. The ‘Psychedelic‘ cardigan, in particular, has the advantage of also expressing the green and sustainable side of the brand. It is made exclusively with regenerated cashmere and wool yarns.

The Alanui brand, whose name in Hawaiian means “great path”, was born 5 years ago, in 2016, founded by the designers Nicolò and Carlotta Oddi based on the concept that sees the cardigan as a canvas of artistic expression and celebration. United by a common passion for travel, the two designers have infused Alanui garments with a strong ethnochic, slightly nomadic style that clearly echoes as a celebration of the natives of America. To characterize the Alanui creations are soft, oversized lines and precious materials such as cashmere, elements with which the clothes of the brands are made.