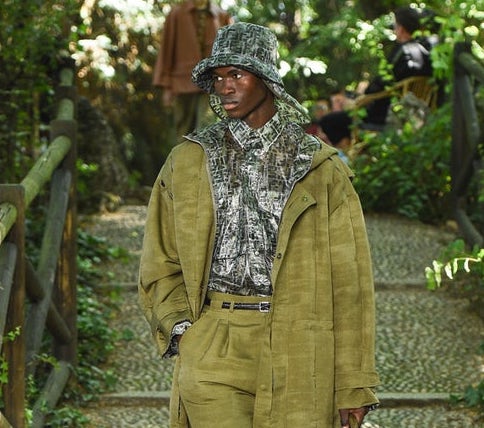 A Meditative Slowness at Fendi

One of Silvia Venturini Fendi’s favourite memories of her childhood is going to her grandmother’s for movie night, when films would be projected on a giant sheet hung in the garden. This was also the time when her mother and aunts would be sharing their design vision with Visconti and Fellini. Silvia remembers the legendary directors turning up at show rehearsals. “So Fendi has always felt very cinematic to me,” she said before her menswear presentation on Monday morning. I wondered innocently if Luca Guadagnino, the “artist in residence” for this new collection, saw himself as carrying on a family tradition. “I wouldn’t dare put myself in the same place as Fellini and Visconti,” he countered with a hearty laugh. Then Silvia had to go and rub it in. “Maybe you would like that I add Bertolucci.” 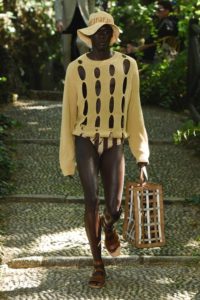 Fact is, the connection celebrated on Monday was forged 15 years ago, when, for a couple of seasons, Silvia replaced her menswear shows with short films by Guadagnino. After the last Fendi production, she proposed to the director that they revisit the collaboration. She says she has always loved sharing the creative process, and she had just lost Karl Lagerfeld, the defining relationship of her life in fashion.

What Silvia and Guadagnino cooked up together was a delightful surprise. Her favourite word with regard to menswear might be “perverse.” And here he is saying, “I like desire and the way desire expresses itself.” (A billion “Call Me By My Name” fans rise as one to agree.) So what did the fearless duo decide to focus on? GARDENING! She loves doing it at her country house on the weekend, tending her roses in particular. He’s looking forward to doing it with the house he just bought in Piemonte.

“In this hyperconnected world, you need to put your hands in the soil, to slow down,” said Silvia. And a meditative slowness did indeed seem to shape the show. On the mood board was the late British writer Bruce Chatwin, who took his time to walk around the world. On the soundtrack was Ryuichi Sakamoto, remixing at Guadagnino’s request a selection of piano pieces he’d recorded 20 years ago as a tribute to his mentors. You’ll have to take it from me that the sound of Debussy and Satie echoing through sun-dappled glades while the models ambled without their usual model-urgency was utterly transporting. 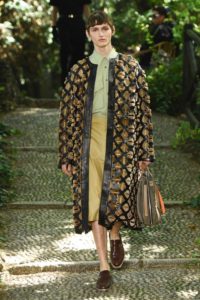 The glades were Guadagnino’s idea. He felt a collection inspired by gardening had to be shown outside, in a garden preferably. The Villa Reale’s garden is more like a spectacular park (it was once home to Milan’s zoo) but it made a ravishing backdrop for Fendi’s own greenery, all shades of it, from leaf to khaki. It’s the job of designer and director to think about characters.

Obviously, they were thinking about a gardener. That much was clear from the first look, the boy in the khaki utility suit with the bucket hat and the cuttings basket. But what that particular character meant for them was more interesting. “The wonderment of a gentleman who is manipulating nature in a healthy, holistic way,” Guadagnino explained. “To do a garden is not simply to immerse yourself in nature because you’re shaping it. So it’s artificial with the utmost respect for the natural.” You could say that is similar to what a movie director or a fashion designer does: absolute artifice intended to produce a world which is convincing on its own terms.

This particular Fendi world was rooted in basics: cotton, wool, organza silk, shantung silk, cashmere. And the fundamental thing of menswear, military tailoring, with the jackets and elongated shorts and the big patch-pocketed coats. (Guadagnino said he was thinking about Sakamoto’s uniforms in “Merry Christmas, Mr Lawrence.”) And, beyond that, the workwear, the denim, the sense of salt-of-the-earth utility. But the substance of all that was unhinged by the floating organzas, the transparent Japanese florals, the delicate ambiguities that have always infused Fendi.

Guadagnino was wearing a green trellis of a cardigan, sort of gutsy and fragile at the same time. It was inspiring to see Silvia working with this new energy. Like a gardener enhances nature, a designer enhances human beings. It’s a whole new movie for Fendi.

Yoox and Prince Charles of England alongside the new artisans