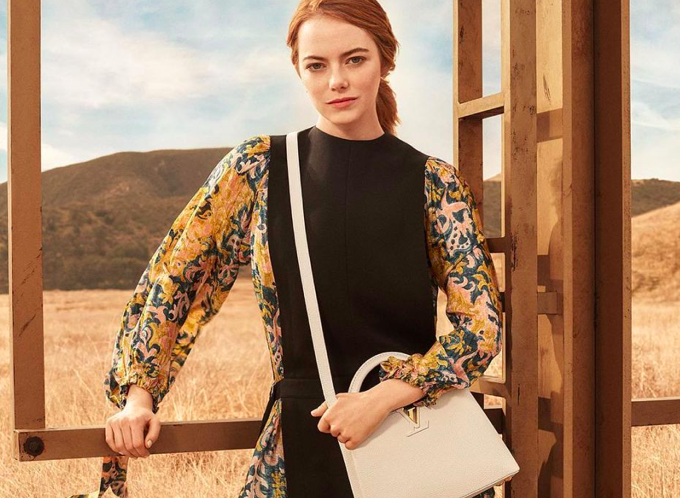 The ads, for Pre-Fall 2018, are part of the house’s “Spirit of Travel” series

Since Nicolas Ghesquière took over the top design spot at Louis Vuitton four years ago, he’s turned to an eclectic, exciting host of models, actresses and erstwhile fashion people as his muses — including (but not limited to) Alicia Vikander, Selena Gomez, Sophie Turner, Riley Keough, Jaden Smith and a computer-generated character, Lightning, from the “Final Fantasy” video game franchise.

Next up is Emma Stone, who joined the Louis Vuitton fold as the French fashion house’s newest face this past October.

And while she’s worn the brand consistently since that announcement five months ago (see: the lacy, ultra-feminine one-shouldered gown at the Golden Globes and the sharp silk pantsuit at the Oscars, created in collaboration with Stone and her stylist, Petra Flannery).

She had yet to make her appearance in an ad campaign, until now.

On Thursday, Louis Vuitton revealed its Pre-Fall 2018 imagery, which pictures Stone wearing some of Ghesquière’s more “Little House on the Prairie”-heavy designs in the California desert.

Craig McDean shot the ads as part of the house’s “Spirit of Travel” series, a range of campaigns that, over the years, have been set in locales from Palm Springs to the South African plains.

The campaign is set to break in the May issue of Harper’s Bazaar U.K., which hits newsstands on March 30.