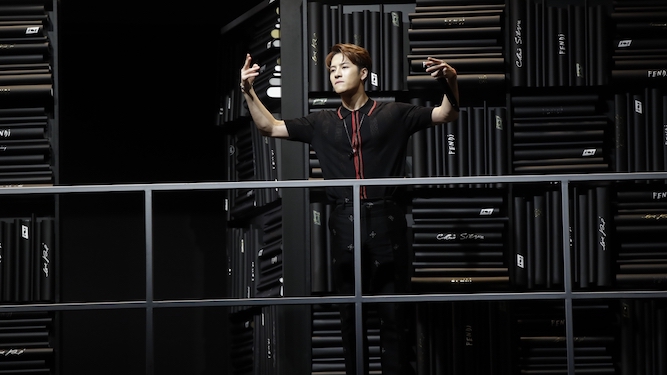 Outside, a small crowd of about 100 Italian and Asian fans swooned and screamed when the rapper arrived. Wang, who is based in South Korea, took his time, stopping to wave for the flashing smartphones.

Performing his hit Fendiman for the fashion crowd, and rapping from an archive balcony that was the runway backdrop, Wang intoned, “Call me Fendiman, welcome to my Fendi-land”.

Fendi-’s fall/winter collection encourages men to get in touch with their feminine side.

During three days of previews, designers at men’s fashion week sent clear signals for next autumn and winter: feminine touches are not only acceptable, they are necessary.

The trend towards femininity in men’s wear could also be seen as a sign of solidarity with the MeToo movement.

The trend could be interpreted as encouragement to get in touch with one’s feminine side, or as an explicit sign of solidarity after a year when the sexual harassment and assault of women became a global theme.

The brand’s menswear collection was designed with input from Karl Lagerfeld.

Sober dress shoes finished the looks, often with a lip on the sole in a contrasting colour – a male version of the celebrated Fendi Baguette bag. And underlining the formal tone were ties.

Models were sent down the runway clutching handheld trunk bags.

A suit jacket with contrasting lapels – one shawl-style and one notched – already has been dubbed the “Karl jacket”.

“There is nothing more subversive than a young man wearing a formal suit,” Silvia Venturini Fendi told Italian reporters.

Valentino, between street couture and freedom

VIP parade in London for the new Herno flagship